Vanipedia - the essence of Vedic knowledge

Jiva as Tatastha-sakti, the Marginal Energy of the Lord

Jiva as marginal energy of the Lord - Introduction 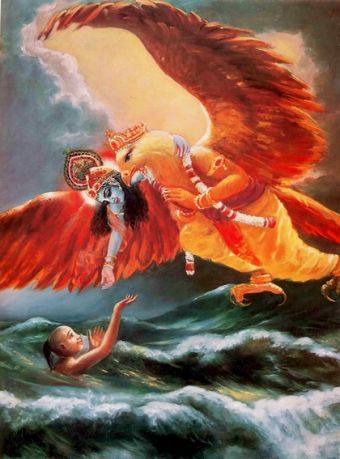 Jiva as marginal energy of the Lord - Summary article

In Vedic literature the living entity is called jīvātmā and Brahman, but he is never called Para-brahman. The living entity (jīvātmā) takes different positions—sometimes he merges into the dark material nature and identifies himself with matter, and someties he identifies himself with the superior, spiritual nature. Therefore he is called the Supreme Lord's marginal energy.[1]

The vibhinnāṁśa expansions, the marginal potencies of the Lord, are the living entities.[3]

Jīva-tattva - vibhinnāṁśa as separated expansions of the Lord

It is not that by māyā we are fragmental separated; when we are liberated, we merge into the body or the effulgence of God. We are separated in..., perpetually. Although we are eternal, but we are perpetually... vibhinnāṁśa. In the Varāha Purāṇa it is said, vibhinnāṁśa, "separated part and parcel." So we should understand very clearly that, although we are eternal, part and parcel, but we are separated. Separated in this sense that we are, everyone of us, are individual, not merge into the existence. Everything is existing. In the Bhagavad-gītā, you'll find: mat-sthāni sarva-bhūtāni nāhaṁ teṣu avasthitaḥ (BG 9.4). Everything is existing in Him, Kṛṣṇa. But still, Kṛṣṇa is not the living entity.[4]

The Lord creates this material world and impregnates the material energy with the living entities who will act in the material world. All these actions have a divine plan behind them. The plan is to give the conditioned souls who so desire a chance to enjoy sense gratification. But there is another plan behind the creation: to help the living entities realize that they are created for the transcendental sense gratification of the Lord and not for their individual sense gratification. This is the constitutional position of the living entities. The Lord is one without a second, and He expands Himself into many for His transcendental pleasure. All the expansions—the viṣṇu-tattvas, the jīva-tattvas and the śakti-tattvas (the Personalities of Godhead, the living entities and the different potential energies)—are different offshoots from the same one Supreme Lord. The jīva-tattvas are separated expansions of the viṣṇu-tattvas, and although there are potential differences between them, they are all meant for the transcendental sense gratification of the Supreme Lord. Some of the jīvas, however, wanted to lord it over material nature in imitation of the lordship of the Personality of Godhead. Regarding when and why such propensities overcame the pure living entities, it can only be explained that the jīva-tattvas have infinitesimal independence and that due to misuse of this independence some of the living entities have become implicated in the conditions of cosmic creation and are therefore called nitya-baddhas, or eternally conditioned souls.[5]

Falling down into the material world

"O scion of Bharata (Arjuna), O conqueror of the foe, all living entities are born into delusion, overcome by the dualities of desire and hate." This is an explanation of how the living entity falls down into this material world. In the spiritual world there is no duality, nor is there hate. (SB 4.28.53)

Hate the service of the Lord

Return back to Godhead

In the Prema-vivarta it is said:

Living entities within this material world are swayed by Māyā

My dear Lord Śambhu, who within this material world but you can surpass My illusory energy? People are generally attached to sense enjoyment and conquered by its influence. Indeed, the influence of material nature is very difficult for them to surmount.

Of the three chief demigods—Brahmā, Viṣṇu and Maheśvara—all but Viṣṇu are under the influence of māyā. In Caitanya-caritāmṛta, they are described as māyī, which means "under māyā's influence." But even though Lord Śiva associates with māyā, he is not influenced. The living entities are affected by māyā, but although Lord Śiva apparently associates with māyā, he is not affected. In other words, all living entities within this material world except for Lord Śiva are swayed by māyā. Lord Śiva is therefore neither viṣṇu-tattva nor jīva-tattva. He is between the two.[6]

Jīva-tattva - living entities not equal to the Supreme Lord

Śrīla Bhaktivinoda Ṭhākura comments in this connection that in all Vedic scriptures the jīva-tattva, the truth of the living entities, is mentioned to be one of the energies of the Lord. If one does not accept the living entity to be a minute, infinitesimal spark of the Supreme but equates the jīva-tattva with the Supreme Brahman or Supreme Personality of Godhead, it must be understood that his entire philosophy is based on a misunderstanding. Unfortunately, Śrīpāda Śaṅkarācārya purposely claimed the jīva-tattva, or living entities, to be equal to the Supreme God. Therefore his entire philosophy is based on a misunderstanding, and it misguides people to become atheists, whose mission in life is unfulfilled. The mission of human life, as described in the Bhagavad-gītā, is to surrender unto the Supreme Lord and become His devotee, but the Māyāvāda philosophy misleads one to defy the existence of the Supreme Personality of Godhead and pose oneself as the Supreme Lord. Thus it has misguided hundreds of thousands of innocent men.[7]

Quiz - test what you have learned

Vaniquotes categories are general topic areas for research and study based on key words (or phrases) and themes.

Understanding jiva as the Lords energy